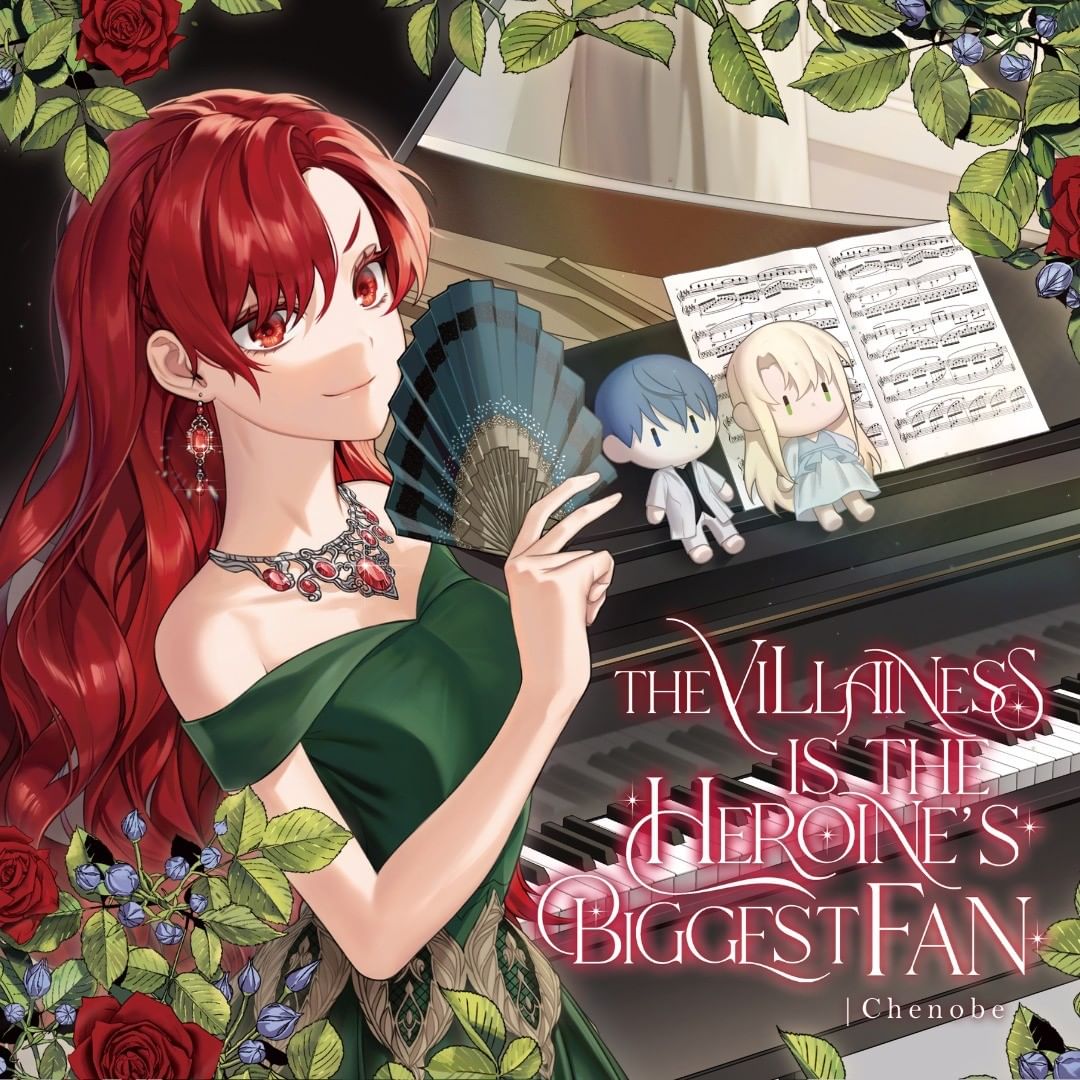 I kept trying to speak politely to the mirror all day, but my attempts were foiled every time by my disobedient lips. I woke up the next morning with nothing to show for my efforts, and I absolutely did not want to get out of bed. I sat up and let the time pass, sighing every so often in frustration.

After who knows how long had passed, someone knocked at the door. “My lady, it’s Lilian.”

I assumed she was one of the maids.

“What do you want?” Once again, my intention for a genteel reply was denied by my lips.

“It’s just that you should start preparing now if you wish to make it to the party on time.”

“Then get yourself in here!” I’d wanted to say Come in!

The door opened quietly, and a calm maid I’d never seen walked into the room, accompanied by the two maids from the previous day. “My lady, we brought the dress you picked out for the imperial birthday celebration.”

The imperial birthday celebration. Many of the main characters would make their first appearances and meet each other at this celebration—and one of those meetings in particular would be significant for me. The emperor’s forty-seventh birthday celebration was where I would meet Aria, the heroine.

I’d been rather hoping that I wouldn’t have to meet her at all.

I recalled a scene from the novel. Aria had been invited to the imperial palace, but she didn’t have many dresses. She came from an impoverished family with nothing left but a noble title. She agreed to go to the palace only because her father urged her to seek out a suitable spouse. Having to work hard to make a living, she’d never dreamed she would attend a social event at the palace, let alone buy a dress for it. After reviewing her small collection of clothing, she showed up wearing the cleanest dress she owned.

Her entrance at the imperial palace immediately caught the eyes of everyone at the party: flowing golden hair, fair white skin, and a serene white dress that suited her beauty perfectly. Given her role as the heroine, no one could resist the urge to stare.

But her debut soon took a wrong turn. Jealous that the daughter of a ruined noble was stealing attention that was rightfully hers, the villainess Mary Bell purposely spilled wine on Aria’s dress.

“Oh, I’m sorry,” Mary purred. “Perhaps you should have watched where you were going?”

It was a ridiculous suggestion, but Aria couldn’t say a word in return, as the lady obviously came from a noble family. Instead, she ran out of the hall after hastily apologizing for her departure.

And as fate would have it, the imperial palace garden was where she would meet Prince Edville, the crown prince.

That was how the story went in the book.

“Whew,” I murmured. How could I avoid a predestined catastrophe with these disobedient lips?

Sighing, I looked disapprovingly at the dress that the maids had fetched. The green would go well with Mary Bell’s red hair and fair skin. But to me, it would only emphasize her extravagance and highlight her villainous side. “Isn’t there anything else?”

“My lady? You said this dress was perfect,” the maid replied, trembling.

I meant to ask if there truly wasn’t another dress, but what came out was “So you only prepared this one dress?”

I wanted to change Mary Bell’s image by wearing a different dress but soon gave up after considering her taste in clothing, which I recalled only too well from the novel. All her dresses were green, red, purple, or black, her characteristic colors. I was sure that her other clothes would not be so different from this green dress, so I stopped fretting and let the maids tend to me.

They diligently tended to my preparations, treating me as though I were a sugar sculpture that would crumble at one wrong touch. Amidst this suffocating atmosphere, I could feel how on edge they were. The dark-haired maid, who seemed especially tense, was visibly trembling.

Something pricked my neck, and I heard hairpins falling to the floor.

The dark-haired maid was trembling. She cast away all the hairpins in her hands, kneeled on the floor, and begged for forgiveness as though it were the end of the world. “My lady, please forgive me!”

“What are you doing?” I cried in surprise. “Get up this instant!”

It was a simple mistake; there was no need for kneeling. But the dark-haired maid remained on her knees, trembling as though she hadn’t heard me.

I decided to dismiss her for the time being. “Get out of here if you plan to keep annoying me. How are you going to help me prepare if you can’t even do my hair? This is frustrating. I’ll wear my hair down. You—pick up these pins and get out of my face.”

“Thank you, my lady. I’m sorry again, my lady.” She thanked me in earnest with her head still down and began snatching up the pins. She must have been completely cowed, because she scurried out of the room the instant she was finished.

Her reaction troubled me. How awful must Mary Bell be for her maid to act this way?

“My lady, I shall help you put on your jewelry,” said the other maid, with the same calm expression she’d worn when she entered the room. Had she said her name was Lilian? I remembered she’d entered the room first. She must be a higher-ranking maid.

Lilian sat me down at the dressing table and put on my earrings, which were adorned with green gems to match the dress. The necklace she brought out was also embellished with emeralds—massive emeralds. I never thought I’d see such fancy jewelry, never mind put it on.

I let out an involuntarily exclamation. “Humph! So you finally managed to pick out something tolerable.” What came out was not a compliment, and I regretted saying it.

But Lilian replied with a faint smile. “Thank you, my lady.”

She continued to help me by applying my makeup and spraying me with perfume. The brunette maid also did her best to help, working in silence. After attaching decorations that looked like real gems to my polished green fingernails, they finally allowed me to get up from my seat.

“I look beautiful!” I marveled, admiring my image from different angles in the full-length mirror. Mary Bell’s face was already pretty, but now it glowed with polished beauty.

I wanted my thanks for the maids’ hard work to sound sincere, so I tried addressing them through the mirror: “For once, it seems you’ve earned your keep. Of course, it wouldn’t have been possible without my natural beauty.”

Despite my condescending delivery, Lilian praised me without so much as a change in her expression. “You’re right, my lady. You are beautiful even in your nightgown.”

I supposed she had to be tactful to serve Mary Bell. “Such an obvious thing to say. Now go and prepare the carriage.”

I gave her an internal thumbs-up and followed her into the corridor.

Someone was standing outside the door, and I knew who it was with only a glance. Red hair, red eyes, and he resembled Mary Bell, although his features were more like those of a dog than a cat: May Bell, her twin brother.

Instead of a friendly greeting between siblings, I spit aggressive words. “What are you staring at? You disgust me.”

May frowned at my remark—but then, he wasn’t close to Mary in the novel, either. Although he was her twin, all they had in common was appearance. “You think I wanted to come here?”

In contrast to Mary, who led an impulsive life, May was described as a diligent and polite young man. He was also the only member of the family who pointed out the flaws of her character, yet he always cleaned up after his troublesome twin and apologized in her stead. It’s no wonder he didn’t like her. Perhaps that was the reason they quarreled every time they were together. They only stuck together because Marchioness Bell, their mother, kept nagging them to get along.

May held out his hand to escort me. “Let’s go, dumbass.”

Uncomfortable about having an escort, I avoided his hand. “Who are you calling dumbass? Did you even wash your hands? Get them away from me.” I slipped past him and got into the carriage.

One hand left holding thin air, he glared before stepping up into the carriage. “Never mind. And please watch your tongue in front of His Imperial Majesty. I won’t forgive you if you say something stupid.”

“You think I’m an idiot?” I retorted. “Mind your own business.”

Don’t worry, May Bell, I’ll try my best to be careful. Even though I’m forced to speak like a harridan, I want to survive. My true intentions, which I wouldn’t have been able to voice even if I were able to speak properly, disappeared without leaving my mouth. I silently turned my head away from May. Staring out the window, I could feel his furious gaze on me.

Amidst the interminable and uncomfortable silence, the carriage finally arrived. Escorted out of the carriage by my disgruntled twin, I straightened my shoulders and swept into the imperial palace, exuding confidence.

The party had long since begun, and the hall was full of people.

“Introducing the son and daughter of The Most Honorable Marquess of Eton.”

We entered the party hall.

May irritably lowered the hand he was escorting me with and whispered in a low voice, “You’re on your own. If anything happens, don’t come to me, because I’ll pretend I don’t know you. We only have to be together when paying our respects to His Imperial Majesty.”

“Who said you needed to stay?” I replied. “I know what you mean, so leave me alone. Go play with your stupid friends.” Don’t worry, I’ll stay quiet.

Everywhere I looked, guests with dazzling, colorful hair and gorgeous dresses were enjoying the party. Younger ladies chatting in small groups scattered as I approached, as though they’d seen something unspeakable. The men stole glances at me even as they pretended not to. Mary Bell would’ve soaked up the attention and roamed the center of the hall, but for me this was an uncomfortable setting.

I decided to look around and turned to stroll through the glittering hall in the most dignified manner I could muster.

Like the second chapter? The Villainess is the Heroine’s Biggest Fan is now available via our web reader and these retailers.