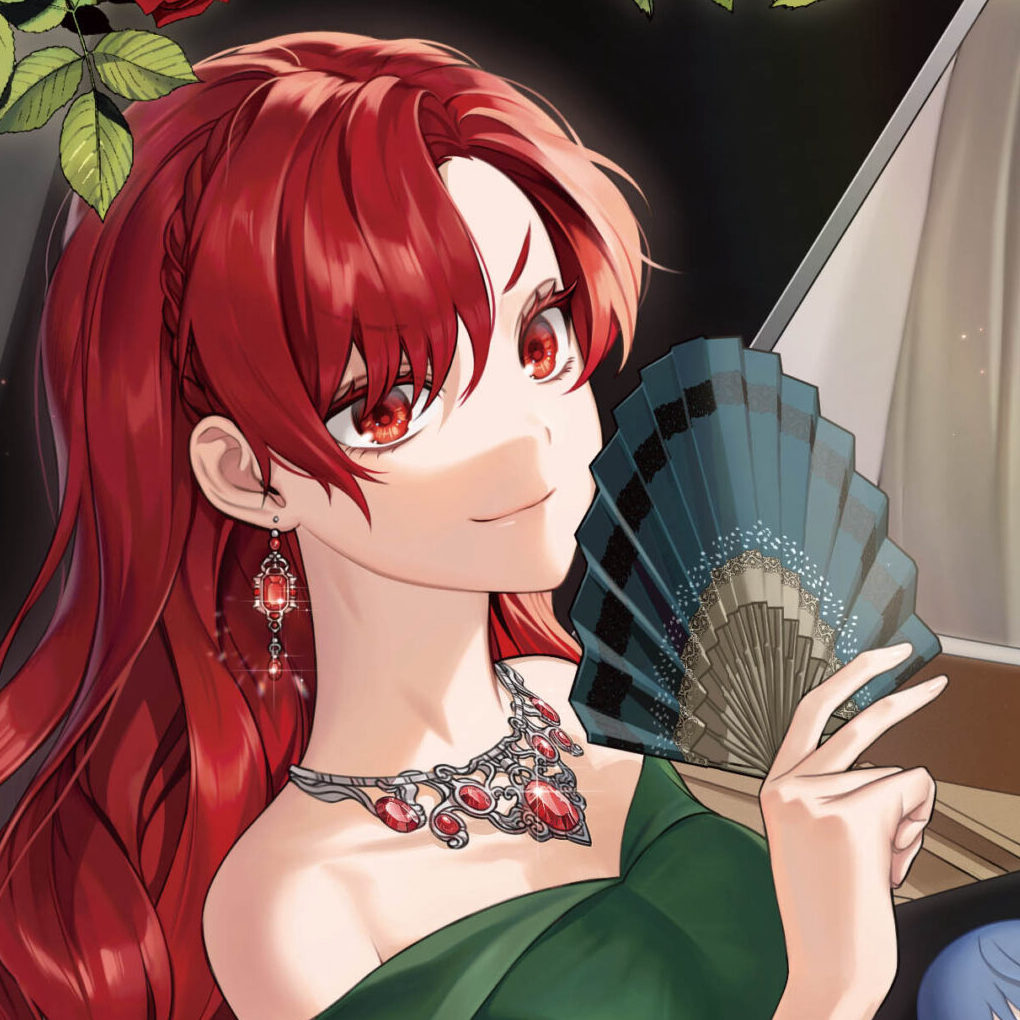 “Boring,” I muttered after walking about halfway across the immense hall. For once, my lips did not twist my words—it was boring! What did Mary Bell do at parties in the novel? If I recalled correctly, she had several followers who always accompanied her at these events.

Just as that thought came to mind, a lady approached me in an exuberant fashion. “Lady Bell, it’s been so long!”

Who was she? I needed a name.

“Who are you supposed to be?” I asked cautiously (or rather, tried to).

It was a blunt question, but she replied as though she didn’t care. She seemed used to it. “My lady, surely you jest! It’s Ashley.”

I knew that name. In the novel, Lady Ashley Gardner was one of Mary’s followers who always joined in when Mary started criticizing Aria.

“My, just look at these earrings!” she purred. “Aren’t those the emeralds from Dowell? I heard they only made five sets of jewelry with those gems. I should’ve known you would have one. They look so elegant on you.”

“I suppose they’re all right,” I allowed. “I don’t wear just any jewelry.”

“Of course. They shine more beautifully on you. They must be happy to be worn by such a fine lady.”

If I’d thought Lilian was skilled at singing praises, she was nothing compared to this young lady. Ashley began praising every aspect of me possible. “Is that necklace a set with the earrings? My goodness, I’ve never seen such a large and beautiful emerald. I believe emeralds must have been created specifically for you. Who else could look so gorgeous wearing green? Compared to yours, my necklace looks like that of a commoner.” She touched her own necklace. Judging by her sullen expression, she was hoping I’d take pity and give her a new necklace.

Ashley Gardner was painfully self-conscious about her family’s lack of wealth. It’s why she followed Mary around, wearing jewelry and dresses that Mary discarded and serving as a faithful follower.

So I told her what I thought she wanted to hear. “Why are you wearing such an unfashionable necklace? It looks as though it must be at least a decade old. Throw that away right now. The necklace I wore last year is better than that. I’ll have it sent to you as soon as I get back. Wear it, if you like.”

It was dismaying to see such an undignified smile. “If it once adorned your neck, it must be beautiful, no matter its age. Thank you, my lady.”

Then again, Ashley was only seventeen or eighteen, and girls that age are usually fascinated by such things.

“My lady, your dress looks lovely as well,” she continued. “I noticed that you decided to wear your hair down today?”

“I got bored wearing it up.” I recalled the maid who poked my neck with a pin and wondered if she was still trembling. I twirled my hair a little.

Ashley didn’t seem to tire. Now she told me how pretty my hair ornaments were, chattering away even though I said not one word. “By the way, Maia is late. It’s not like her to arrive late to an event like this.”

Maia—I remembered her. She and Ashley were Mary’s two most loyal sycophants. In Mary’s first scene in the novel, they had stood behind Mary and laughed along with her at Aria.

Ashley agreed, “I suppose so.” Then, she changed the subject, “Anyway, my lady, is it true that the crown prince is attending today’s party?”

This was to be Prince Edville’s first public appearance in two years. Having been absent from every public event in order to tend to the sick empress, he was the fairy tale prince—no, the crown prince—of every young lady’s dream across the empire. Aria didn’t know this and probably didn’t care, but more than half of the young ladies at this party were dying to catch his eye.

“I can’t wait,” Ashley said. “I know His Imperial Majesty would prefer to lay eyes on someone as beautiful as you, rather than me, but I’m thrilled at the chance to see him myself. I wonder how handsome he is?”

The emperor’s deep love for his empress was well known, which is why he had excused the crown prince from public affairs for the last two years to tend to her. Today, for the first time in two years, all the members of the imperial household would be in attendance.

“Of course,” I said, “but what does it matter? I already have a fiancé.”

“It’s an engagement, not a marriage,” she replied. “Ah, what if the duke’s son and the crown prince decided to duel to win your love?”

My fiancé and the prince? Duel to win my love? It ridiculous to consider, even as flattery. Mary Bell had been engaged to the son of a duke since birth, but I didn’t want to get involved with him. Not only was he not interested in me at all, but he was a secondary character who would soon fall for Aria and ask to break off our engagement.

But I stopped talking and let Ashley dream on. I was afraid I would speak harshly if I opened my mouth again.

Despite my efforts, Ashley didn’t take the hint. “It’s so romantic that marriage for love is the tradition of the imperial household. Didn’t His Imperial Majesty also marry the empress—she was the daughter of a viscount at the time, wasn’t she?—after a passionate courtship?”

It was a tradition I was sure had been put in place to make the romance between Aria and Prince Edville seem plausible: No member of the imperial household would marry for political reasons. This tradition explained how Prince Edville and Aria could begin courting, and it annoyed Mary Bell to no end. Even though she already had a fiancé, she believed with absolute confidence that the crown prince would fall for her. But a month and a half from now, she would witness Prince Edville and Aria together at the summer hunting tournament, which would fill her with a burning rage.

What didn’t I have that she, the daughter of a viscount with nothing but a name, did? Mary Bell was a one-dimensional villainess who belittled Aria at every turn out of jealousy and a cruel disposition. I remembered being amazed at how childish and stubborn she was when I was reading the novel I now found myself in. But since I was Mary Bell now, it wouldn’t play out that way.

Ashley seemed visibly anxious. Maybe she thought I was sighing because I was bored of her chatter. “By the way, my lady…”

The doors of the hall opened wide to grand music. “His Imperial Majesty is entering!”

The emperor gestured for everyone to raise their heads. “I thank all the distinguished guests who have graced this celebration with their presence. Her Imperial Majesty, my beloved Empress Tanzania, is here with me today, which makes me happier than words could ever express.” Even without a microphone, his booming voice echoed through the hall. He smiled and continued. “And with my son Edville ever steadfast at my side, I truly am an emperor blessed with everything he could ask for.”

At his words, the handsome man with dark hair and violet eyes beside the frail-looking empress bowed his head. Crown Prince Edville.

“Just look how handsome he is. It’s stunning.” Ashley’s eyes sparkled as she stared up at Prince Edville. Little did she know that he was destined for someone else.

I shook my head quietly, and Ashley eyed me nervously once more. Perhaps she took my gesture to mean How dare you?

“Today is a joyous occasion,” the emperor continued, “so everyone should enjoy themselves by feasting and drinking to their hearts’ content. Now, let the celebration continue!”

To resounding applause, servants escorted the emperor to the high seat. He let out a hearty laugh as they filled his glass.

“Mary, Mary!” May, my twin brother, frantically gestured. It was time to pay our respects to the emperor.

Ashley greeted May as he approached. “Lord Bell, it’s been a while.”

“It has, Lady Gardner,” he replied. “My apologies, but may I escort my sister to greet His Imperial Majesty?”

“Tsk.” Seeing him so polite made me click my tongue. I didn’t mean to let it show, but my body moved of its own accord.

May shot me a sharp glance but couldn’t say anything snide in front of the others. Instead, he held out a hand. “If you would, Lady Bell?”

“Put it away.” I brushed aside his hand. Mary’s body was instinctively rejecting his touch, which told me how deeply these two detested each other.

I quietly followed May. As the daughter of a marquess, I couldn’t avoid paying my respects to the emperor on his birthday.

“Oh?” the emperor said as we approached. “Well, if it isn’t the twin son and daughter of Lord Bell.”

“Your Imperial Majesty,” May and I replied in unison. We saluted the emperor according to proper etiquette.

The emperor looked happy to see us and beckoned us to come closer. “Are you two already seventeen years of age?”

“I remember when you were little children, following the marchioness around. Now you’ve grown up and are attending court functions in their stead. Time flies.”

“We can’t thank you enough for remembering us,” I said.

“Remind me, when are the marquess and his wife due to return?”

“They’re due to return next week by sea.” I’d worried I would be forced to speak rudely in front of the emperor, but I guess even Mary Bell wasn’t that deranged. Now that I stood before the emperor, I displayed the perfect etiquette of a noble’s daughter.

The emperor glowed with pride, as though looking at his own children. “I see. It’s good to see the next generation growing up to be so fine. Thank you for attending today’s celebration. I hope you enjoy yourselves.”

“We will, my lord,” May said. “Congratulations on your forty-seventh birthday.”

Well, that had been easier than I thought. There was a long line of nobles and delegations who had come to pay their respects and offer gifts to the emperor, so we had little time to stand before the high seat.

May sighed with relief and turned to me. “I’m not cleaning up after you, so don’t get in trouble. I’ll be going now.”

Oh, I wouldn’t. “Go mind your own business.” Please enjoy the party.

May disappeared into the crowd, and I turned my head in search of Ashley. She was with another girl, presumably Maia, and waved when she spotted me.

Did you enjoy chapter three? Read chapter four and more on our web reader or through these retailers.