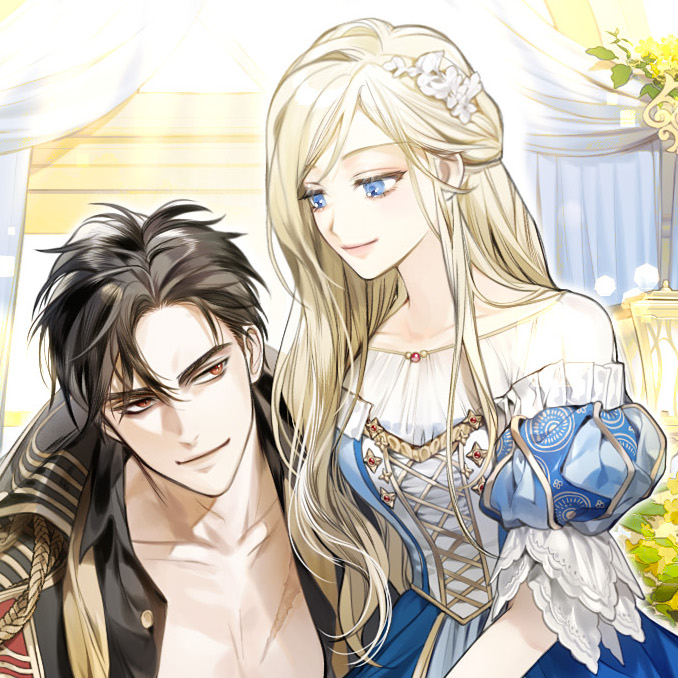 After the unforgettable meeting with Livia, Croft sat crookedly on the sofa looking through the endless piles of papers the duke had asked him to memorize before he ascended the throne. But he couldn’t focus at all. He shook his head to get rid of the memory of the young woman’s impressive uppercut, but he couldn’t. So he gave up trying to memorize anything and put the papers down.

The massive Malik was about as mature as a three-year-old. Though he made simple questions sound like an interrogation, he was just curious. “Is it true? Did you really hit the duke’s daughter?”

Croft turned as soon as he heard the question. Malik, his chest heaving and face flushed, hadn’t come alone. He was followed by a worried-looking Blake. Behind them, Chester was giggling as usual.

“It’s just a lie, right?” Malik demanded. “I know you. You’d rather kill a woman than hit her. Unlike some scum, right?”

Croft rubbed his head, not from Malik’s ear-shattering voice but because of the words themselves. Hitting women? I was the one who got kicked and punched.

He pushed Malik away. “Blake, explain what this fool is talking about.”

“Two of Duke Blanche’s knights challenged us to a duel just now. They said you assaulted the duke’s daughter.”

“What nonsense! Where are they now?”

“This idiot knocked them out.” Blake pointed at Malik.

I told them not to cause problems… Croft rubbed his forehead and sighed.

Malik misunderstood and began to mumble in shock. “Captain, I didn’t expect you to be such complete scum…”

“Damn it, Malik, stop with this nonsense. I didn’t hit that woman.”

“Right? See, I knew you didn’t.” He didn’t sound convinced.

Croft ignored it. If he responded, Malik would start up with his overcharged voice again, and he wanted none of that.

“Then why is such a rumor spreading?” Blake asked, still worried about the emperor-to-be.

“I should be the one asking who hit whom,” Croft said. “She’s the one who hit me.”

“What?” Blake blanched. “The duke’s daughter hit you? No way!”

“She said I shouldn’t touch women without their permission,” he replied with a smirk.

Neither Blake nor Malik smiled back. Instead, Malik frowned again and shook his finger at Croft. “You scum…”

“I’m disappointed in you, Captain.”

“Like I said, it’s not what you think.” Croft was finally annoyed.

Malik flounced from the room as though his feelings had been hurt.

Chester collapsed on the floor in giggles.

“Ha-ha, Captain, this is so hilarious,” Chester gasped. “Ha-ha…”

Croft shook his head and began making excuses. “It was nothing. I didn’t even lay a finger on her.”

But now, he realized that he had laid a finger on her, on her chin, ever so slightly.

And that’s the reason he got punched.

Isn’t that punishment enough? Why on earth are there rumors that I hit her? The rumors were completely out of the blue.

Blake’s frown grew even deeper as he watched Croft shake his head. Despite being known as a madman, Croft wasn’t the type of person to use his power to harass women—at least, that’s what Blake wanted to believe. But Croft’s behavior told him that something must have transpired between the two. This type of scandal wasn’t good for Croft, especially with coronation day looming.

“Captain, we’ll encounter many problems if the duke becomes our enemy now,” Blake said. “Why don’t you apologize to his daughter?”

“Didn’t I tell you that I was the one who got hit by her?”

“If that’s because you did something to deserve it—”

“I admit I was trying to scare her a bit, but I didn’t do anything to deserve that.”

Blake knew very well how intimidating Croft could be. Perhaps the duke’s daughter thought her life was in danger and tried her best to defend herself. He didn’t know what exactly had transpired, but he felt sympathetic toward Livia. And yet it seemed that Croft’s harassment wasn’t ill-intentioned, so the emperor-to-be should resolve the misunderstanding.

First, Blake had to pacify his upset captain.

“Captain, you shouldn’t act like your usual self in female company,” he advised sincerely. “You should be gentle with them, especially ladies like Duke Blanche’s daughter.”

“I did my best.” No one believed Croft, even though he was speaking the truth. Hadn’t Livia left unharmed, even after kicking him in the shin and punching him in the face? She would be dead now if she were a man. He really had done his best.

Blake’s anxiety rose at Croft’s sullen reaction. “Captain, Prince Persilot began to take action. You shouldn’t make Duke Blanche your enemy, at least before your return to the palace.”

Soon after the former emperor passed away, the crown prince had died suddenly from an unknown illness, causing the formation of various factions vying for the throne. One of them supported Croft, the other, Persilot.

Prince Persilot, the late emperor’s brother, had bluntly expressed the desire to ascend the throne and was displeased at the prospect of Croft’s succession.

Duke Blanche, the leader of the faction supporting Croft, persistently prompted the rumor that Persilot had poisoned the crown prince. Persilot didn’t want the disgrace of assassination associated with his name, so he pretended to humbly support Croft’s ascension to the throne.

As a result, it was decided that Croft would become the next emperor. However, everyone knew that Persilot hadn’t given up his ambitions.

Croft, who had yet to return to the palace from his childhood exile, knew more than anyone that he must be careful. There was no need for Blake to tell him so.

Blake noticed the captain’s sullen expression and spoke in a cheerful tone. “For the time being, please apologize to Duke Blanche’s daughter. Tell her it was all a misunderstanding caused by different customs between this region and the Eastern Frontier.”

“Blake, I’m telling you for the third time that I was the one who got assaulted.” Croft was decidedly irritated.

Blake didn’t blink an eye. “But you admitted that you touched her. Moreover, even if you were assaulted, you weren’t hurt. I might not know the specifics of the situation, but if anyone was hurt, it had to be her. Please offer an apology, at least.”

Although Blake’s understanding of the situation was different from reality, his insight was correct. Croft felt that the whole situation was unfair, but the more he listened to the three men, the more he was convinced he’d probably done something wrong.

Eventually he nodded. “All right, so please take Chester away. And look for that fool Malik before he causes more trouble.”

“Yes, Captain.” Blake grabbed Chester, who was rolling on the floor, by the nape of his neck and dragged him from the room.

It wasn’t easy to explain to Malik, whom Blake found crouching in the corner of the garden and blaming the world, that Croft wasn’t scum. But Croft had it far harder. He had to apologize to the woman who’d hit him.

Lunchtime came and went, and Croft still hadn’t found the right words for an apology. All the maids and servants had heard the rumor by now and stared at Croft as he stalked toward the dining hall.

Already settled in the dining hall, Livia rose and nodded graciously when Croft arrived with a frown. Although he seemed outwardly calm, she felt as if her heart were going to burst out of her body. He’d been so quiet earlier that she assumed he’d let it pass. But now he looked angry.

Punching him was too much, after all. Am I going to die today?

She was glad he hadn’t brought his sword, but as she recalled the novel’s descriptions of his overwhelming power, her relief evaporated. Her heart pounded so fast she thought she might die from a heart attack before the madman had the chance to kill her. Livia’s organs were as delicate as her body.

Croft sat quietly. Livia, who couldn’t look him in the eye, waited anxiously for the food to be served. She would be dining with him the entire week in order to teach him table manners. He couldn’t imagine how they could proceed like this.

Staring at his empty plate, he spoke. “I am sorry.”

Livia couldn’t believe what she had just heard. Did he apologize to me? Did he really say he’s sorry? He didn’t say that he would kill me. Why?

She reviewed what had happened that morning, but there was nothing he had to apologize for. In fact, if anyone needed to apologize, it was her—not him.

What is he sorry about? Did he apologize for getting kicked and punched? What is he saying? Is that what the people from the eastern frontiers say before they murder someone? What does that all mean?

She couldn’t make sense of what he’d just said, but what he said next was even stranger. “I’m not used to the customs here, so please do understand.”

The customs here? What customs is he talking about?

There is no custom anywhere in the world that allows a subject to punch the future emperor in the face.

Did you enjoy chapter three? To read the entire first volume, check out our web reader or these additional links.